Amongst the museums I visited while in DC, my least favourite was The National Museum of American History (NMAH). Upon reflection, it is not that I disliked the content of the museum, I just had a hard time grappling with the national differences of conceptions of history.  I expected a grand narrative style of history in the museum and was confronted with something very different.

Canada's national museum system does not include a museum dedicated solely to the history of Canada as a nation, but perhaps the closest would the Canadian Museum of Civilization.  The CMC isn't solely a national history museum, but it does currently give the most cohesive museum based look into Canada's past. But, the two institutions are so different comparing them is akin to apples and oranges.

One of the main things I struggled with in the NMAH was the focus on individual great figures.  I found the large overarching history of America was told most frequently through a great man style narrative.  The most prominent exhibits that stick out in my mind as falling under this category include : The American Presidency: A Glorious Burden, Lighting a Revolution—Electricity Hall (focused on Edison), and Slavery at Jefferson’s Monticello: Paradox of Liberty.  In each of these cases the emphasis tended to be on the individual not on larger historical trends. 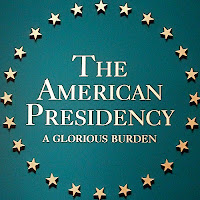 These exhibits also reinforced the extent to which Canadian Prime Ministers and US Presidents exist on very different plains of history in their respective countries.  Prime Ministers are viewed as players in history but Presidents seem to be points around which history revolves.  Presidents are seen as being directly associated (and responsible) for key events and developments, where as Prime Ministers are seen as parts in a larger less individualized narrative.  I'm not sure either interpretation is better than the other.  Rather, the interpretation reflects each country's unique view of the role of government and the past.

I also struggled with The First Ladies exhibit at the NMAH.  The NMAH website suggests "The First Ladies encourages visitors to consider the changing role played by the first lady and American women over the past 200 years."  To be honest, I had a hard time getting past the fact that the prominent items displayed about each Woman were dresses and dishes.  Similarly, the majority of the prominent text panels focused on the First Ladies' role as hostess, entertainer, and public face.  While walking through the exhibit part of me kept thinking "I wonder if they know that women can wear pants now."   The exhibit also left me wishing that there was more content in the NMAH about the history of women's rights and changing roles of women in America.

Even with these conceptional struggles I did enjoy my visit the NMAH.  I think the highlight for me was the Star Spangled Banner exhibit.  I had never really considered the history of the first flag in America and the exhibit but the exhibit helped put that history into context.  This exhibit was also interesting to see from a curatorial perspective, as the flag is huge making special display considerations necessary.

How do you see national conceptions of history being explored in museums?
Posted by Krista McCracken