As part of the Ontario Library Association's annual conference I attended the opening plenary on "Extraordinary Canadians." This panel featured John Ralston Saul, Adrienne Clarkson, Jane Urquhart, Nino Ricci, and Mark Kingwell. All five of these individuals have contributed to the Extraordinary Canadians biography series. This series examines the lives of people who have helped shape Canada in the 20th Century. All the books in this series were written by great Canadian authors, and each biography is under 200 pages. The idea being that biography should be readable, accessible to the general public, and encourage an interest in Canada's history. I couldn't agree more with the need for history to be more accessible, and think that this series is an interesting approach to making history more tangible.

It was interesting to see Canada's history and the biography genre discussed from a literary standpoint. Despite the literature based nature of the discussion a number of interesting questions regarding the interpretation of history were raised. In particular, I found the question of silence's role in literature and history intriguing. It was suggested that both history and literature need to be engaging to the reader. How the reader interprets the written word can be far more significant than the written word itself. I would tend to agree. Once a work is published an author's intentions lose some importance, and the readers' interpretation becomes an entirely new dimension to the work.

I was also very surprised by panel's discussion of Innis' interpretation of Canadian history. It was suggested that Innis' theory regarding Canada as an experiment in communication technology is something which can be seen throughout the lives of almost all extraordinary Canadians. Additionally, it was argued hat the notion of "the word" is something which is prominent in the lives of all Canadian greats, and that the nature of Canada demands that people use words in a spacial and creative way. Some of the finner points of Innis' work were glossed over in this discussion. However, it was still interesting to see the inclusion of historical theory in the panel.

Overall, this was a great way to start the OLA conference in my mind. The discussion raised a lot of interesting questions about the importance of audience interaction and the role which history plays in society.
Posted by Krista McCracken No comments: 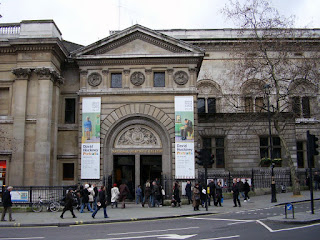 The National Portrait Gallery of London recently released an online collection catalogue and made some of the institution's historical records available online. The Gallery's institutional records were previously not accessible to the general public and include a number of insights into the unique history of the institution.

One of the more shocking bits of institutional history released is a document which examines a murder-suicide occurred in the the Gallery's east wing in 1909. The Gallery's records also include a report which highlights the rat problem the Gallery faced during WWII. The majority of the previously unreleased institutional history focuses on exciting, bizarre, and exceptional events.

The inclusion of interesting anecdotes in an institutional history allows for the history of the Gallery to appeal to a wider audience. By placing emphasis on unique occurrences at the Gallery, the Gallery's past becomes interesting, making people want to know more about the institution itself. I think the release of this material to the media was a great public relations move by the Gallery. This release has allowed the Gallery to gain a more youthful and interesting personality in the face of a public which isn't always interested in history, art, or museums.
Posted by Krista McCracken No comments: