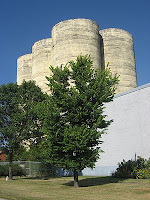 The Moulin à Fleur neighbourhood Sudbury located immediately north of the downtown core was one of the first neighbourhoods to develop outside of the original settlement. The most well known landmark in the area is the flour mill which gave the community its name. The mill silos will be 100 this year.

This mill has long closed and the mill's silos were designated a city heritage site in 1973 and recognized under the Ontario Heritage Act in 1989. Additionally, the mill's foreman house was converted into a community museum in 1974.

Despite these positive preservation efforts the flour mill landmark in Sudbury is in a state of disrepair. The silos that the city has previously deemed a heritage property have received no maintenance work in many years, and the entire structure is nearing a state of demolition by neglect.

The neglect of the silos has left the city with a choice to either repair or demolish the silos, as they are becoming a safety hazard. Demolition costs have been estimated at $520,000 to $850,000, and refurbishment at $1.7 million. However, based on the age of the silos there are a number of heritage grants which local organizations are applying to in hopes of helping finance the repair. Many Moulin à Fleur community members see the mill as been a valuable part of their local heritage and are against the demolition of the silos. Hopefully the city can be convinced of the value of this local landmark.
Posted by Krista McCracken 1 comment:

My latest blog post on the value of Canadian folk music as heritage and the importance of preserving this form of oral history can be seen over at activehistory.ca
Posted by Krista McCracken No comments:

Like most people today I spend most of my day interacting with digital technology in some way. Digital mediums are a crucial part of my job, even though most of the physical material I'm working with was created long before the internet and computer became mainstream. This contrast seems reasonable when you look at it from a preservation standpoint - digitization has the potential to allow documents to exist long after paper has deteriorated.

Despite this logic and being a slight technology geek and addict, I found the recent CBC Doc Zone episode Are We Digital Dummies? oddly appealing. The show provided an interesting look at the impact of technology on business, personal interaction, and how we manage technology. The documentary itself wasn't anything earth shattering. It built upon the studies which show that we are poor multitaskers and the work of Nicolas Carr author of "Is Google Making us Stupid?" Despite the lack of ground breaking conclusions it was nice to see technology placed in a Canadian context and to be exposed to some Canadian technology usage stats. Am I going to change my technology habits as a result of watching it? Most likely not, I am writing about the show in a blog after all.....
Posted by Krista McCracken 2 comments:

The Battle of Standardization

My recent foray into the archival world has provided me with a renewed appreciation for standardization of descriptive techniques. Rules for Archival Description (RAD) is a national (Canadian) set of rules for archival description. The first edition of RAD was established in the 1990s and has since become common place in most quality archives in Canada. Outside of Canada similar rules to RAD exist. In the United States the Anglo-American Cataloging Rules, second edition (AACR2) serves the same purpose as RAD.

RAD and similar codes provide standard outlines of how descriptive data and general metadata is recorded and organized. This allows collected information to maintain uniformity between organization, provides structure to data, and establishes professional standards. Granted, there is room to develop internal policies which work with RAD to meet organizational needs. Even with these adaptations of RAD most archival descriptions are created in a very standardized manner.

I recently accepted a position in an archive, this move from the museum world to the archive has highlighted the overwhelming lack of descriptive standardization in the heritage field. Most heritage organizations have internal policies which dictate how metadata should be organized and outline descriptive practices. However, in Canada there currently is not a professional standard which unifies descriptions (or anything else) between organizations.

Creating a professional standard and an agency to maintain that standard isn't an easy task. But, considering the success of standardization in the archival field and the library world it is surprising that more attempts haven't been made to regulate the museum field. Formal guidelines for description have the potential to help museums which currently lack quality metadata procedures and to create assist in ensuring the quality of information being collected by museums.
Posted by Krista McCracken No comments: