The Current on CBC has an interesting ongoing feature this year, which focuses on centenarians in Canada.  The program 100@100 aims to speak to 100 Canadians over 100 years old in 2011.   The program seems to have slowed down for the summer, but the Current has managed to speak with 29 centenarians so far. So unless the pace picks up greatly I'm not entirely sure the goal of recording 100 centenarians will be met.

I was initially drawn to this program as it allows people from all walks of life participate in oral history.  The program also presents the memories and stories of the participants in a manner that is reminiscent of a Grandparent sharing experience.  It also emphasizes the importance of recording personal and family histories before all memories are lost.  Overall, its a great program if your interested in Canada's oral history.
Posted by Krista McCracken No comments:

My latest post "Returning Home: Repatriation and Missing Children" can be seen over on the Active History site.  The post looks at the legacy and ongoing impact of the children that went missing or were buried without their families' knowledge while attending Residential School in Canada.
Posted by Krista McCracken No comments:

August's #builtheritage twitter chat focused on under-served communities and how to reach those communities.  The chat included great discussion and a couple of interesting side debates about the term preservation.  The complete chat transcript can be found here.  Next month's #builtheritage chat is slated for September 7th at 4pm and the tentative topic is collaboration.


The first portion of this month's chat focused on the question Who are preservation messages/sites/programs usually aimed towards?  A lot of the responses suggested that preservation messages are often aimed towards the previously converted, and those already interested in preservation. There was also a discussion of what age groups of people are generally involved in heritage preservation.  Some of the comments suggested that a lot of the 'official' type groups are aimed at retirees.  However,  @Wanderu noted that "Community blogs have resulted in a big increase in awareness of heritage and history amongst younger folks"


The second part of the chat dealt with What communities are being under served by the preservation movement? Responses mentioned immigrant communities, youth, rural populations, and low income areas.  It was also pointed out that heritage and preservation needs to be made relevant to these communities and that appealing to emotion, telling a story, and engaging communities is essential.


The third segment of the chat highlighted How can you determine what will best serve that community? Suggestions included: listening to the community, being sensitive to needs, and combine education and consultation.  A number of participants (@delaneyhf, @BuildingRevival, and @chouse17, @uglyshirt) also mentioned the importance of community engagement and the need to to include heritage in the planning stages).

The conclusion of the chat focused on the question of How can you connect with these groups?  The responses in this section mirror the discussion earlier in the chat.  Responses reaffirmed the importance of education, consultation, making people aware of resources, and finding common ground.  The rural area of Tamworth Ontario was put forth by @ Wanderu as an example of engaging rural communities. @PresNation also mentioned the work that @laconservancy is doing at Wyvernwood as a good example of engagement.

Despite having driven by the French River rest stop and Visitor's Centre on Hwy 69 dozens of time, I hadn't been inside the facility until this past week. I was thoroughly surprised by Centre's content -- it has more interactive displays than most small museum curators dream of --one of the benefits of Provincial funding I suppose.

The current exhibits showcase the history of the French River area, the natural heritage of the area, and the stories of First Nations, French, and English explorers who came to French River.  The displays highlight the unique architecture style of the building and features like the section of glass floor showcase the natural landscape of the area. 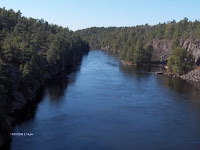 In addition to the centre, the rest stop includes great walking trails that follow the French River.  There is also a walking bridge that crosses the river and provides and excellent view of the surrounding landscape.   The French River Provincial Park also includes 290 campsites, canoeing routes, and fishing areas.
Posted by Krista McCracken 1 comment: 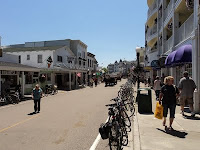 Last month I spent a day on Mackinac Island in Michigan.  This excursion was filled with heritage gawking and a visits to living history sites.

Some of the trips’ highlights include: 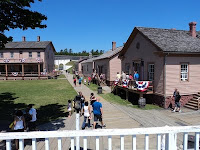 It was a great trip.  Though, a word to the wise: July/August is the Island’s peak tourist season, I recommend avoiding the main street of the island after about 10 am, unless you enjoy copious amounts of people and touristy shops.  Despite the crowded main street the rest of the island wasn’t nearly as crowded and there are tons of walking trails that are little used.
Posted by Krista McCracken 1 comment: