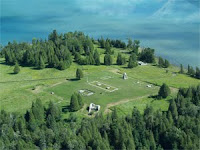 A few weeks ago while my parents were visiting me, we made a trip to St. Joseph's Island. Part of this day trip included a visit to Fort St. Joseph. This site was strategically located on coastline of St. Joseph's. The fort was occupied by the British until 1812, when the fort was taken over by American troops during the war of 1812. The abandoned fort was later burned by American troops. The fort has been designated as a national historic site, the site includes a small museum and the public is able to explore some of the excavated fort's remains.

The staff at the site recommend that visitors start off by watching an educational video about the fort. This video provides a lot of context on the site, explains why the site is historically significant and examines a lot of the artifacts found on the site by archaeologists. The major downside of the video is that is 15minutes long. Children and even some adults may find the video too long, and a bit too dry. Case in point, my Dad who tends to enjoy military history, fell asleep about 10minutes into the video.

The exhibit portion of the heritage site focuses on what life was like in the fort. It highlights the life of the typical solider, how the officers lives, and includes some information on neighbouring First Nation communities. The majority of the artifacts mentioned in the educational film are on display in the portion of the facility. Somewhat lengthy text panels feature predominately in the exhibit hall. However, there is a small interactive section where children (or big kids...like my parents and I) can dress up in period clothing. This provided a bit of a break to the more traditional forms of historical interpretation which are prominent in the exhibit hall. If nothing else, the dress up corner resulted in much laughter and some amusing photos. 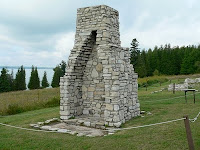 Visitors to Fort St. Joseph are also able to look at the 'ruins' of the old fort. A good portion of the fort has been excavated, and pieces of almost all of the original stone buildings can be seen. The ruins provide a nice physical example of the information learned about the fort through the educational video and the exhibit hall at the site. Overall, the visit was well worth the drive down a horribly weathered road.
Posted by Krista McCracken No comments: