Language is one of the most commonly used means of expression. A language speaks volumes about the culture that developed it. Despite the value society places on language, there are a number of Aboriginal languages in Canada which are in risk of dying off within a generation. The impact of the residential school system and the Canadian government's policy of assimilation played a major role in the loss Aboriginal language. By removing children from their communities and forcing them to speak English multiple generations of Indigenous people have lost their traditional language.

A recent segment on Spark discussed the use of digital translators in Inuit communities as a means of teaching dying languages to youth. The digital translator discussed was Phraselator. Phraselator allows language speakers to record as many phrases and words as possible and then their students can listen access these recordings as necessary. At five thousand dollars each and given the fact that the Phraselator cannot compare to being exposed to an actual native speaker, the device seems like a poor solution.

Despite the drawbacks of this particular digital translator's implementation, it is crucial that we begin some form of language preservation. This may include educational incentives for those wishing to learn a language or preserving both written and recorded language alongside accurate translations. The use of digital recordings, transcription, and OCR software all have potential to be adapted to help preserve Indigenous language and teach a new generation the language.
Posted by Krista McCracken No comments:

Earlier today the topic for the second twitter #builtheritage chat was announced. The chat will take place on April 6th at 4pm and will focus on sustainability.

Kayla Jonas provides a great summary on how to participate in the chat.

The first #builtheritage chat was a huge success and I am looking forward to seeing what this new topic inspires.
Posted by Krista McCracken 1 comment:

Recently, while at a friend's house I picked up a local history book that was sitting on their coffee table. The book focused on the history of Espanola Ontario that was written by a local history enthusiast. In the introduction of the book, the author stated that he had not made an effort to record any sources; however if readers were curious they could contact him and he might be able to point them to where his information came from. Instantly, the academic historian in me cringed and I began to lament the state of local history writing.

However, upon later reflection I began to think about the larger question of citations in popular publishing, local history works, and public history writing. Footnotes or endnotes are standard practice in academic writing. But, they are rarely used in more popular publishing. In my mind good public history writing should find a way to cite information without being intrusive.

Digitally published information can include hyperlinks as a means of providing supplemental and source information without the formality of a footnote. Print publishing is faced with a slightly more arduous task of integrating sources into the flow of writing. Despite the many intrusive methods of citing information, good writers can seamlessly note where material derived from within the context of their writing. I think it is crucial that academic historians who desire to be accessible to a popular audience consider how to maintain historical credibility while appealing to the reading sensibilities of the public at large.

Public history works which immediately come to mind as having successfully integrated source material and popular writing include: Beautiful Barrie: The and its people, No Place to Run: The Canadian Corps and Gas Warfare in the First World War (includes a well organized section of endnotes), and the majority of the articles printed in Canada's History Magazine.

What works do you consider successful balances of academic and popular history writing?
Posted by Krista McCracken 3 comments:

As a growing number of historical resources become available online, the internet is increasingly becoming a site of serious historical research, inquiry and education. Yet it is important to approach information on the internet with caution, assessing its value with a critical eye.

ActiveHistory.ca is expanding its review section to include scholarly analysis of websites. It is imperative in this “digital age” to develop the tools necessary to critically engage with this expanding resource base.

Timmins is currently in the midst of celebrating four centennials. These celebrations have inspired a number of commemoration projects and local histories to be written. A concise history of mining in the area is one example of this commemoration.

Photo credit: The History of Timmins, The Early Years. This website has a number of photographs of Timmins and area from Library and Archives Canada and local collections.
Posted by Krista McCracken 2 comments:

My most recent post focusing on the open source software alternatives available to heritage organizations can be seen over at the Active History Group Blog. The post focuses primarily upon the benefits of using open source exhibit design and photo manipulation tools such as Google Sketchup, GIMP, and Inkscape.
Posted by Krista McCracken 2 comments: 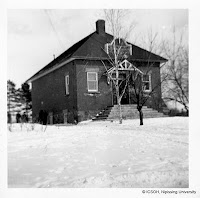 This week's Northern Ontario Historical Photograph is of the Nippising Junction Public School in 1948. This one room school house was for grades one to four and serviced an area that is now part of North Bay, Ontario.

This photograph is from the Michael Oldfield collection held by the Nippising University Archive. The Archive has a number of interesting collections, including a well documented selection of panoramas. However, the local history website and a number local history projects were completed by the Centre for Community and Oral History which no longer exists.
Posted by Krista McCracken No comments:

The first built heritage twitter chat took place earlier today. The chat focused on adaptive reuse and was moderated by @jonaskayla, @presconf and @presnation. The chat was well organized and included a number of interesting questions and examples were brought up. The #builtheritage chat is currently slated to run on the first Wednesday of the month at 4pm. The complete transcript of the chat is available here.

The first portion of the chat focused on the question "What are you favourite examples of adaptive reuse?" Some of the most interesting examples included the Ford assembly building in Richmond CA, The Alumane Theatre which was once a fire hall, Toronto's Distillery District, and the converted Brisbane Powerhouse.

The discussion then moved on to the question, "What are the biggest barriers for adaptive reuse?" This portion of the chat focused mainly on the misconceptions associated with adaptive reuse. Misconceptions include the idea that adapted buildings can't be green, that reuse prohibits city growth, and that the people automatically assume a higher cost is associated with reuse.

The third portion of the chat focused on what steps heritage groups can take to encourage adaptive reuse. One of the best points in this section was the need to acknoweldge adaptive reuse is also a great "in-between" between full-fledged historic preservation and living/working in a modern setting. Additionally, it is essential that people be aware of what the advantages of adaptive reuse are, be shown successful examples, and highlight the flexibility in reuse.

A follow up question asked for input on how to local support for adaptive reuse of buildings. Suggestions included giving tours of reuse buildings, getting support from the local government, highlight the integrity of the building and what it means to the community in a wider historical context.

The final portion of the chat focused on the question "Is there a building you would like to see reused? For what?" A couple of the neat suggestions that were put forward included: The Auchmar Estate to be reused as a conference centre and the R.L. Hearn Generating Station as a museum.

Overall the chat brought up some interesting ideas and it was great to see people of a variety of backgrounds and interests take part in the discussion. I look forward to seeing what type of discussion the future chats inspire.
Posted by Krista McCracken 3 comments: