I've had some changes on the job front recently. For over two years I have been working as an Archives Technician for the Shingwauk Residential Schools Centre.  My job developed a lot over this time period, expanding from processing and description work to conducting educational tours, outreach initiatives, and reference support.

As of this week, I've moved from the Archives Technician position into a new Researcher/Curator position.  I'm still working in the Shingwauk Residential Schools Centre, my job is just shifting from archival projects to some of the broader education, dissemination, and research work done by the Centre.  I also get to take on more of a project management role in this new position. It should be interesting to see how this position and the Centre as a whole develops in the upcoming months. Allons-Y!
Posted by Krista McCracken No comments:

Morning North recently featured a segment on the facebook page "Sudbury's Fine Past & Future Let's Reminisce."  The page aims to share photographs and memories of Sudbury.  The page has over two thousand likes and over 50 photo albums focusing on all aspects of Sudbury history including theaters, hospitals, streetcars, and neighborhoods. The success of this historically focused initiative surprised me, I expected to see a page with lots of content added by a small handful of contributors and little discussion.  Fine Past & Future seems to have an active and dedicated community of users and contributors who actively contribute and comment on photographs.

What intrigued me about the Morning North Interview of the page founder, was the comparison of the page to an archive.  When asked if she thought the page was like an archive Church-Beaudoin indicated that she thought it was something different and that archives were really only for research and not designed for sharing photographs for those with just a casual interest in the past.   [Full disclosure: I almost started telling my car radio the many virtues of archives at this point.]

A facebook page is definitely not an archive in the traditional sense.  I suppose one could argue that this particular collection of photographs represents a snippet of a personal collection or a personal archive.  Regardless, the comparison of a collection of photos to an archive isn't what bothered me.  The relegating of archives to serving only professional researchers is what didn't sit well in my mind.

Archives do a lot more than merely serve academic researchers. Archives help preserve the heritage of communities and aim to share that preserved heritage with the community.  Many archives have started using social media in a way similar to the Fine Past & Future page--to share photographs and gain user generated metadata about unknown images.

Archives also undertake the preservation of physical and digital content.  That user generated metadata is being preserved by archives and not merely left up to facebook to keep safe.  Those physical photographs of community landmarks, historical buildings and community gatherings are being preserved  in acid-free sleeves and environmental conditions that are designed to limit deterioration.

Yes, archives have traditionally been the domain of academic researchers.  But genealogists, casual researchers and community historians are all welcome in many community archives.  Many archives have created finding aids specifically to help with genealogy research or have reading rooms focused on local history.  The users of archives are just as diverse as the content held by the archive.  Archives need to continue to promote themselves, their services and their collections to the general public. 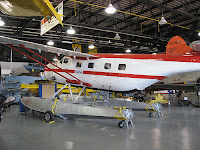 Last week I had the pleasure of attending a concert as part of Bon Soo (think Winterfest on a Northern Ontario scale).  The concert featured two great traditional music groups, Dentdelion and Les Poules à Colin.  The music was a great display of traditional music heritage and the preservation of Canadian francophone culture.

In addition the concert being an example of the preservation of traditional music, the concert was held at the Canadian Bushplane Heritage Centre and was a great example of a heritage organization using its facility to move beyond internal display space.  Granted, February might not be the best time of year to host an event in an airplane hanger -- most of the audience kept their coats on throughout the evening. But, events such as this highlight the efforts the Bushplane has undertaken to become known as a flexible conference, wedding and event venue in Sault Ste Marie. In the past few years the Bushplane has hosted bridal shows, conferences, a stroller fitness program, a beer festival and countless other events.

During intermission at last week's concert, attendees were welcome to wonder amongst the planes displayed in the main portion of the Centre's hanger. I over heard one attendee remark, "I had no idea planes were so big" and the few children who were in attendance seemed in awe of the space.  Despite having lived in the area for three years and having a love history, I had never set foot inside the Bushplane prior to the concert.  Events such as concerts have the ability to introduce new people to a museums and inspire interest in a facility that some people might never have entered otherwise.

Facility rentals also have the potential to be great sources of additional revenue for heritage organizations.  In the case of the Bushplane they have invested money in tables, chairs and linens to make their space more appealing and to facilitate a rental package.  Clearly, a venue such as an airplane hanger has a few more space options than a small house museum.  But, even smaller museums can be used for wedding photos or meetings.  Multipurpose spaces provide heritage organizations with flexibility in display, rentals, and outreach activities.

What nontraditional events have you attended or organized in a museum space? 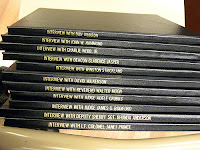 In the past when I have worked with audio recordings of oral history interviews I have worked with Audacity for the digitization and transcription of the recordings.  Audacity is open source and does a great job in the digitization process and handles the manipulation (clean-up) of audio files well.  Additionally, Audacity does allow users to slow down the playback rate, which helps a lot in the transcription process.

However the transcription process can be a bit clunky if you are constantly switching between an Audacity window and a word processing program.  I've found that using two screens and Alt+TAB can help with switching between programs to replay bits of audio, but the process has never been ideal.

I haven't bee using Express Scribe for nearly as many different tasks as I use Audacity for, but it has a good setup for transcription.  The interface is super easy to understand and it can be downloaded for free. Setup and figuring out how to use the program for transcription took under ten minutes. Comparatively, I found Audacity great once I got used to it but the multiple toolbars and copious numbers of icons made it a bit daunting at first.

Express Scribe has also been mentioned multiple times on the H-oralhistory listserv as a good option for oral historians.  Personally, I like the program because you can adjust the audio and type all within the same window.  It's like a playback program and a word processing program combined.

What digital tools do you use in the transcription process?

A number of jobs and volunteer positions I've held have allowed me to work from home or off-site.  For example: The History Group internship I completed in 2009 had me working on source identification projects from home and in 2010 I volunteered as a historical research associate with the Red Cross.

In the same vein, I recently started volunteering with the Multicultural History Society of Ontario (MHSO) on their Discovering Multicultural Ontario Digital Archive project.  In this role I'm helping with the transcription of oral histories that have been collected by the MHSO.  I can work from home on this project as the MHSO has set up an FTP site and guidelines for volunteers who live anywhere in Ontario.

The MHSO has over 9000 hours of recorded oral history, much of which was recorded on cassette tapes.  This current initiative, funded by an Ontario Trillium Foundation grant, aims to preserve and increase accessibility to these oral histories.  Over 1200 recordings have been digitized and people across Ontario are helping with the transcription of these recordings.

One of the interesting aspects of this project is that the oral history recordings were recorded across Ontario.  As a result, even though the MHSO is located in Toronto and many of its projects have focused on Toronto communities, in this project I have been able to listen to and transcribe oral history recordings from Northern Ontario.  Even though I've just started volunteering with the MHSO, I've already learned a number of interesting facts about life in Sudbury in the early 1900s.

Overall, volunteering with MHSO has reminded me of the value of volunteers and collaboration within the heritage field.  The Digital Archive project has also highlighted the time consuming, detail oriented nature of transcription.  There is an overwhelming number of archives and museums that hold unprocessed oral history collections, many of which are recorded on cassettes and other slowly deteriorating mediums.   It's great to see a project placing such a high value on oral history and working to make oral history collections more accessible to the general public.
Posted by Krista McCracken 5 comments: