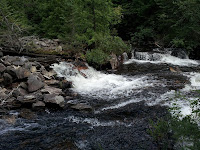 Recently I spent a night at Mississagi Provincial Park and Campground, just north of Elliot Lake Ontario.  The Park is classified as a 'natural environment park' under the Ontario Provincial Park system and is one of the parks that was slated to be changed to a non-operating park (eg. day visitors only) last fall.

Mississagi was kept open this year under a one year trial program which drew on resources of Elliot Lake.  Essentially, during the trial period Elliot Lake is responsible for staffing, operational and capital costs and will cover any losses that the Park incurs.  I had a great experience at Mississagi and it will be interesting what will happen to the park in the future. 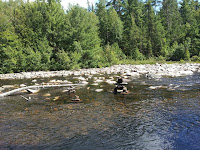 Given the vast amount of crown land, lakes, and forest areas in Northern Ontario moving parks to non-operating status means the use of park space would probably drop dramatically.  There is a ton of choice for fishers, hikers, boaters etc and many people want to be able to stay over where they are spending the day.  If Mississagi drops to day use only status some have speculated that the park will probably see an even greater drop in attendance.

Overall I had a great experience at Missisagi.  The walking trails were great -- albeit lacking in interpretive signage. Granted, I didn't splurge on the comprehensive trail guide which probably included more detailed explanations of the natural landscape. I also went kayaking on the main lake in the Park and the views from the lake and the trails were beautiful.  Places like Mississagi Park serve as an excellent reminder of the natural value of the vast outdoor spaces in the North.
Posted by Krista McCracken No comments:

Bill Waiser's  recent "Parks Prisoners" article in Canada's History  examined the role POW camps had in the parks system, with a particular emphasis on the impact of POW labour on the western expansion of Canadian parks.

Waiser's article got me thinking about the existence of POW camps in Ontario during World War II.  Many of these POW work camps existed in Northern Ontario but there are few formal monuments to the camps and few people know of their existence.

Internment camps in Ontario during World War I:

For those interested in learning more about a specific camp Library and Archives Canada has a guide to the history of internment camps in Canada. A map of the camp locations and smaller off site work camps can be seen here.

I was surprised by prevalence of camps in remote communities and the use of POWs in lumbering, farming, road building, construction, and pulp mills. A number of the internment camps were located in Northern remote areas or areas in need of labour for development.

Some of the larger camps -- Kingston and Petawawa are well known and seen as historical significant.  The Fort Henry Camp in Kingston is a national historic site for it's role in the war of 1812 and it's use as an internment camp.

However, many of the more remote camps have little signage (some do have historical plaques) and aren't immediately recognizable as historic sites.  Many of the sites have been overtaken by nature with little visual evidence of their nature. Perhaps the desire to forget this aspect of Canada's past has contributed to the lack of public knowledge around Canadian internment camps and the sparse interpretation of these sites.
Posted by Krista McCracken No comments:

Though both types of labels serve similar purposes -- to inform patrons about the work on display, the style of the labels can very greatly.  Ideally both museum and art labels should link back to the theme of the exhibit and support a general interpretation plan.  Introductory, background, gallery overview, and individual work labels are all common art exhibit label types.

My history background urges me to fill labels with historical context and biographical type details. Cultural and historical context are still important in art labels but so are references to artistic style, technique, process and linkages to the visual works.  Like museum exhibition labels there is always a struggle to include relevant information in a clear, concise, and appealing way.

Personally I find introduction and gallery overview panels the most difficult, as these tend to be the most text-heavy labels.  When I visit art museums or galleries I like reading overview labels, but I often find that I skim longer labels and by the end of the gallery I have label fatigue.  There needs to be a middle ground between over explaining/labeling items and not providing any context.