Another one bites the dust....or is in the process of it. 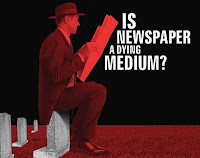 I recently stumbled on a random facebook cause called Don't Let Newspapers Die. Apparently we aren't the only ones worried about technology replacing print. I was mainly surprised that there was over nine thousand members for something like this. The page has a little list as to why newspapers should be saved, its nice to see that the first reason is because "newspapers are a very important historic & public resource." However the fact the third reason is "newspapers are cool" makes me a little bit skeptical of the merit of having a facebook page to support print documents.
Posted by Krista McCracken