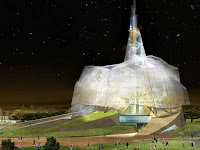 This Friday Stephen Harper will attend the ground breaking ceremony for the much debated Canadian Museum for Human Rights (CMHR) in Winnipeg. Initial estimates suggest that the museum will cost somewhere around the $265 million range. The construction costs are estimated at being the greater than the costs for the ROM or the War Museum, while operating costs are anticipated as being the lowest of all the national museums. The design for the museum is architecturally pretty amazing and the idea that a museum should be dedicated to the struggles of marginalized groups is fairly refreshing.

One of the main debates about the project has been the location of the museum The CMHR will be the only national museum located outside of Ottawa. Some of the arguments for having the CMHR in Winnipeg include: it is at the center of North America, Winnipeg has a unique civil rights history, and that Winnipeg has a diverse cultural community. The fact that the General Strike of 1919, Louis Riel, and Neillie McClung are all connected to Winnipeg is one of the many reasons Winnipeg was chosen.

That being said I'm still not entirely sure placing a national museum in Winnipeg was the best decision. The phrase "national museum" implies it is connected to the nation as a whole and is aimed at serving the entire nation. One of the nice things about having all the national museums located in Ottawa is that one trip allows people to experience all of them. Likewise there are numerous other incentives to visit Ottawa, such as seeing the Parliament buildings, which Winnipeg does not have.

However I do think this project is salvageable and has the potential to succeed. Providing proper incentives to visit Winnipeg are created and more importantly a digital version of the museum is at least partially available. A digital tour or digital exhibits would all more Canadians to experience this national museum, even if they cannot make the trek to Winnipeg.
Posted by Krista McCracken