Inauguration in a Digital Age 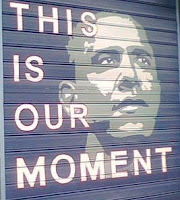 Obama's inauguration has being called the first true Internet inauguration by some. The amount of digital media surrounding yesterday's inauguration is simply staggering. According to the Globe and Mail, during Obama's speech 12 million people were accessing news content a second, Obama's facebook and myspace fan pages drew record numbers, more than 40,000 photos on flickr were tagged with inauguration, and twitter use spiked.

All of these social networking sites allowed for people to be constantly updated on the inauguration, even if they were not able to access a television. Additionally, these sites allowed the average person to comment and reflect on the event. These comments are just as valuable as the speech itself, as it reflects the public opinion of Obama, and public opinion is something historians have been trying to find a reliable way to gauge for decades.

In addition to social networking sites, the Obama youtube channel has become the test channel for a new google feature. The new feature allowed users to actually download content onto their computers. This has never been done on youtube before, primarily due to copyright issues I suspect, so it is unclear if this is a one time thing or a beginning of a new dimension of youtube.

More digital representations of the inauguration can be seen in artistic representations of Obama that people have posted online. The CBC site put together a photo gallery of Obama inspired art, The Obama Art Report features a wide collection of digital art and photographs of physical creations, The Art of Obama features a similar variety of artwork and also includes pictures of the inauguration itself and Obama memorabilia, and google search on Obama art gets 53,000,000 hits.

There is a mass amount of digital material available for anyone even remotely interested in the recent inauguration, its just a matter of sifting through the staggering amount of user photos, reflections, interpretations and memories.
Posted by Krista McCracken