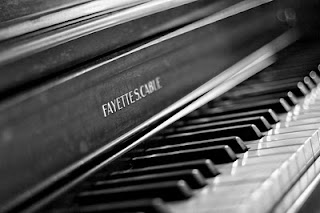 A recent Spark program on CBC radio focused on David Cope and his exploration of the role of artificial intelligence in the creation of music. Cope began working on a similar program Experiments in Music Intelligence(EMI) in the 1980s. This program took existing styles of music and created music based on those styles. For example, the EMI software could 'listen' to a number of works by Beethoven and then creates a unique piece of music based on the musical styles of Beethoven. The use of artificial intelligence to create music based on the style of famous composers in my mind seems like taking historical reproduction to the next level. Instead of merely reproducing existing work EMI rearranges and builds upon existing works. It is not merely repoducing but re-framing and reinterpreting past works. Not exactly a look into the past, but maybe a look into a kind of alternate version of the past.

More recently Cope created an AI program called Emily Howell, which has the ability to 'independently' compose new music. This machine created music has been met with mixed results (here, here, here). Some have criticized Cope with destroying the last human element of music composition, while others have praised his ingenuity. The music created by Emily Howell has its own unique style. Additionally, Emily can take instructions and modify 'her' music based on the preference of the user. The software breaks music down into mathematical and scientific formulas and creates music based on assigned algorithms. The moral merit of the music created by Emily Howell aside, the use of AI based software to create classical music is pretty both creative and an interesting step towards a new branch of music.
Posted by Krista McCracken

Emily Howell is a great composer, no matter if she only uses digital stuff

She's an incredible and talented woman I've heard some of her projects and that's perfect sounds she gets are terrific.m10m

this is the first time that I hear about a digital composer, but well this is a modern era, so why not use all the modern elements?