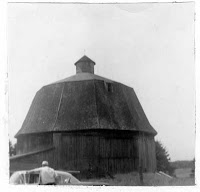 There are reportedly only three 12-sided round barns in Canada. Two of which happen to be located not far from where I'm currently living. One is found just outside of Thessalon, Ontario is currently being used as a gift shop. This building was built in 1928 by local resident Alex Campbell, Jr.. The barn's roof has been re-shingled in recent years (2003) however the rest of the barn maintains its original integrity.

The second barn is located also located in the Municipality of Huron Shores and was recently relocated and re-purposed to be a community building. This barn was previously known locally as the Cordukes' barn, and was constructed by local resident Thomas Cordukes in 1918. Local history suggests that Alex Campbell assisted Thomas Cordukes in 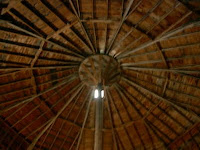 the construction of this barn in 1918 and perhaps was inspired by that experience when constructing his own round barn ten years later.

In the early 2000s the local heritage association identified the historical significance of the Cordukes' barn and through local fundraising in 2009 work on relocating and restoring the Corduckes' barn began. Many of the original beams and posts were rotted beyond repair 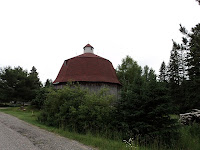 however where possible the original materials of the barn were reused. The municipality currently envisions this re-purposed barn to serve as a museum, community dance hall, farmers market, and general gathering place. This barn has just opened up for public functions and is well on it's way to becoming integrated into the community. It's great to see a heritage building being preserved and reused.

I agree completely, the re-purposing of the barns is one of the things which interested me the most. It's great to see people being able to actively use and access the buildings.