Orphan Photos of a Nation: James MacDonald and Charles Tupper 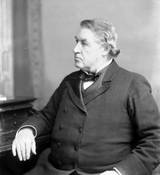 The story of Wayne MacDonald's excellent antique store find is a great example of 'orphan photographs' having personal and national significance. In 2003, Wayne MacDonald stumbled across a pile of antique photographs in the storeroom of a Winnipeg Antique shop.

In a bout of chance theses photographs were of MacDonald's extended family (James MacDonald) and friends.  The photographs include many previously unknown images of well known Canadian figures James MacDonald and Sir Charles Tupper.  To add the serendipity of the find the images were rescued from a dumpster 25years earlier by the store’s proprietor and had been sitting in storage ever since.

Since Wayne's discovery of the photographs, he has had the images restored and is unveiling the images to the public in an exhibit entitled "Serendipity".