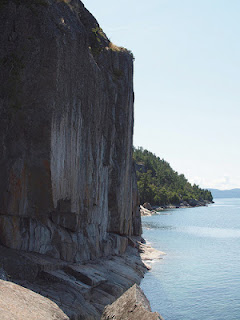 To view the Agawa Pictographs visitors have to climb out onto a ledge that extends over Lake Superior.  The ledge can be slippery at times and visiting the site during good weather and in groups is recommended.  The climb to the Pictographs is breathtaking and truly worth the effort, though I wouldn't recommend it if you are prone to fear of heights or have a fear of water.  The nature of the Pictographs -- painted using a natural substance and constantly exposed to the elements -- has contributed to the deterioration and fading of the images over time.  It is unknown how many other images have already disappeared or become inaccessible. 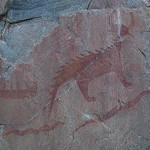 Some of the figures depicted in the Pictographs reflect spiritual and oral traditions in Ojibwa culture. One of the most visible and well known Agawa Pictographs is a depiction of Mishipeshu, the water spirit who lives in Lake Superior.  Mishipeshu is known as a water lynx and it is believed to control the conditions of the waters in Superior; if he was content the water would be clam but if enraged Lake Superior would be violently rough.

There is a slight irony in the fact that the Pictographs are located in what is now a Provincial Park.  The land which was once home to a nomadic and vibrant First Nation peoples is now owned by the government and used primarily by tourists -- the original peoples of the area were evicted by the government and relocated.  Granted, the Provincial Park has helped preserve this segment of Canada's natural heritage, but it is important that visitors acknowledge the traditional territorial rights of the area and are aware of the history that isn't presented by the Agawa Visitor's Centre.
Posted by Krista McCracken