Community Curators and Interpretation: The National Museum of the American Indian 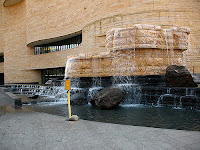 Earlier this week I spent a couple of days immersed in the museums, galleries, archives, and monuments that are located in Washington, DC.  After some reflection, my visit to the National Museum of the American Indian (NMAI) was by far the best experience of the trip. I was impressed by the inclusive curatorial practice, the building design, the collections in general, and their interpretive program.

I started my visit on the fourth flour of the NMAI exploring the "Our Universes: Traditional Knowledge Shapes Our World" exhibit.  This exhibit looks at traditional spiritual worldviews help by Indigenous peoples from throughout North and South America.  Prior to my visit to the NMAI, I had no idea that the museum included content about all Indigenous peoples of the Americas, it was great to see so many distinct cultures represented.

The setup of the Our Universes exhibit really brought to light the inclusive curatorial practices of the museum.  Each section of the exhibit listed a group of "Community Curators."  These community curators are people belonging to the culture which is being interpreted and were often noted as elders and cultural leaders in the community.  A staff member I spoke with explained that the community curators worked with NMAI staff to select appropriate artifacts from the museum's collection and to select methods of display and label wording.  Each section of Our Universes was unique in it's layout and what aspects of worldview it emphasized, making it clear that each display was tailored to the needs and desires of the group it represented.

In addition to the inclusive curatorial practices of the museum, I was impressed by the how well thought out the design of the NMAI was.  The construction of the NMAI was based on intensive and in-depth consultation with the indigenous peoples the NMAI aims to represent.  Indigenous worldviews influenced many aspects of the construction of a building and landscape.  Some of the key architecture features include an east facing entrance, a dome that opens to the sky, a circular main room, and four elevators representing the four directions.  The gardens and grounds are also considered an extended part of the museum -- the gardens include over 27,000 trees, shrubs, and herbaceous plants representing 145 species; these species represent a traditional landscape that no longer exists in DC. Forty Grandfather rocks, and four cardinal direction markers have also been placed outside to honour the Native cultures of the north, south, east, and west.

Collections, exhibits, and design aside, I can't recommend the NMAI interpretative program enough.  The tour I took was by far the best part of my entire visit to Washington.  The tour I participated in was lead by a man who is from a small Indigenous tribe in Peru.  My guide (Jose) and many other Indigenous peoples from around the Americas now work at the NMAI and work to help patrons understand Indigenous culture.  Jose was well versed on the history of the museum and provided insight into the collections and architecture of the NMAI that I didn't get from a self guided tour.  He was well versed in the provenance of the artifacts featured in the exhibit we looked at.  He also spoke his own language and played a traditional instrument for our tour group, which made the experience very personal and unique.

My entire experience at the NMAI highlighted the lack of dedicated museum space in Canada to Indigenous heritage.  The hall of First Peoples in the Canadian Museum of Civilization doesn't come close to exploring the rich diversity that exists amongst Canada's Métis, First Nation, and Inuit peoples. Many Canadians have little exposure to Indigenous history in Canada and it would be great to see a space dedicated to make this information more accessible to Canadians.
Posted by Krista McCracken