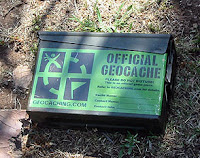 Parks Canada recently announced a Northern Ontario heritage GeoTour that combines geocaching and the history of the Northern Ontario region.  Details on the GeoTour were a bit difficult to locate initially, as the links provided in my local paper didn't direct users to the correct site and the parks website has a number of geolocation based programs.

The Hide'n'Seek program includes 16 geocaches located as far south as Algonquin Park, as far north as the James Bay coast, and as far west as Fort Frances.  Given the vast distance between the geocahes it is fairly unlikely that too many people will visit all of them.  However, there are various clusters located around Thunder Bay, Sault Ste Marie, Sudbury and the Hwy 17 corridor which might be great stopping points for anyone traveling across the province.

The historical details of the GeoTour are well written and often involve visits to Parks Canada sites and local landmarks.  For example, the Sault Ste. Marie Commerce cache includes a visit to the Francis Clergue plaque, the Nicolas Perrot plaque, and the Ermatinger House.  Each stop includes a description of the historical context and explanation of the impact of person or location of the development of trade and commerce in Sault Ste Marie.  Given that this GeoTour was created by Parks Canada it's not surprising that locations of many of the geocaches encourage participants to visit parks or local heritage sites.

Overall, the GeoTour seems like a neat way to encourage the general public to interact with history in a new way.  The tour is educational, includes a number of interesting landmarks, and makes use of the growing abundance of smartphones.  The only potential downside to the tour is that there are significant distances between many of the caches.  It would be nice to see more caches developed throughout the region so that local participants could take advantage of more of the GeoTour without having to drive thousands of kilometers.
Posted by Krista McCracken