Ring Forts and Castles in a Farmer's Field 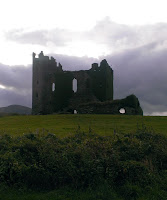 The Ring of Kerry was one of the low points of the trip for me.  Yes, the landscape was beautiful but it was a lot of driving and there were definitively other natural heritage sites that I thought more impressive.  However, part way through the Ring of Kerry I visited the Ballycarbery Castle and Ring Fort located near Cahersiveen.  Both of these sites were located in farmers' fields and were amazing ruins to explore.

Ballycarbery Castle is thought to have been built in 1560s by the MacCarthy family. Portions of the castle have fallen down, walls are missing, many of the staircases drop off in the middle of nowhere, and the much of the stone is covered by vines.  The Castle is located right by the sea and for the more adventurous it is possible to climb up to the second story and explore some of the small rooms.  This was probably one of the most rustic sites I visited and because of the out of the way location there were no other visitors while my partner and I were exploring the site.  There are some small directional signs pointing the way to the Castle, however the actual site doesn't have any signage.  It would have been nice to be able to learn more about the history of the site and the building.

A short distance from the castle is the Cahergal Ring Fort. Like the name suggests the Fort is circular in nature and the interior of the Fort looks like a tiered amphitheater. The rock that makes up the Fort is all dry stacked without any visible adhesive and given the age of the structure it is only natural that in some spots the rocks have started to come loose.  During my visit, one section of the Fort was blocked off because of preservation efforts to the structure. It is possible to climb up the circular fort to the top of 'Ring' and view the surrounding countryside -- lots of sheep and some cows. Similar to the Ballycarbery Castle there was no signage at the Ring Fort and the site was unstaffed.

The town of Cahersiveen was fairly unremarkable but a five minute drive off the main road towards the beach was well worth it.  The Castle and Ring Fort and great examples of the excessive number of heritage sites, old castles, and stunning views in Ireland.  The sites are in such an abundance that many can be found in the middle of nowhere, with little signage and fanfare.