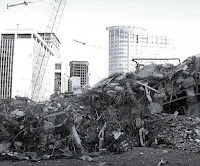 The December 5th #reverb10 prompt is: Let Go. What (or whom) did you let go of this year? Why?

A number of Ontario communities let go of valuable built heritage this year. Old buildings have been damaged by neglect, torn down by cities, or 'renovated' in the name of modernization. Earlier this year the Heritage Canada Foundation put out a 'worst losses' list which named the most significant buildings lost in 2010. The list includes:

All of these buildings were valuable based on their age, architecture, or provenance. It's disconcerting that three of the six major losses on this list are from Ontario. Built heritage preservation simply isn't a priority or fiscally feasible for a lot of communities. As a result, it seems as though at least once a month another irreplaceable historical landmark is let go of.