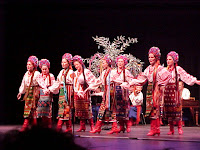 Last weekend I had the privilege of attending a Ukrainian dance recital put on by the Zorya Ukrainian Dance Association in Thunder Bay, Ontario.  The recital depicted history from numerous distinct regions of the Ukraine.  The dances, costumes, and music all reflected particular events in Ukrainian culture from various different regions.

Until attending this recital the only exposure I had to Ukrainian dance was at a wedding.  The dancing at the wedding was done by a dance trope and was fantastic, however I had no idea of the historical roots and context that the dancing embodied.

The repertoire of the Zorya dance group focuses on the 19th century Ukraine.  Bits of history that were readily apparent through the dances included traditional farming techniques, marriage ceremonies, hospitality protocol, and gender roles. 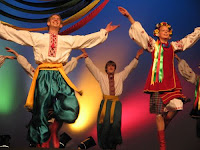 Dance steps and costumes in Ukrainian dance are extremely gender oriented.  Certain types of dance are reserved explicitly for males, eg. using swords as props.  Other dance steps such as lifts, shawl dances, ribbon and flower props are used only by females.  At first I was a bit taken by how strictly gendered everything was, however considering Zorya's emphasis on the 19th Century Ukraine, the gender roles are reflective of the period.

Watching this dance trope was a great experience and brought aspects of Ukrainian heritage alive in an interesting, engaging, and lively way.  If you ever have the chance to see Zorya or another Ukrainian dance group I highly recommend it.

What other types of traditional dance embody cultural history in a similar way?
Posted by Krista McCracken