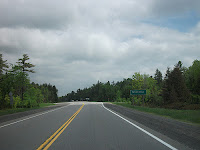 In 1949 parliament passed the Trans-Canada Highway Act, which established a Provincial and Federal cost-sharing scheme for the highway.  Construction started on building a highway across Canada in 1950, and the highway was formally opened in 1962, despite construction not being completed on the Highway until 1971.

Part of this lengthy construction process was due to the natural landscape that was being covered.  Between Sault Ste Marie a stretch of 265 km proved one of the greatest challenges. If you have ever traveled this beautiful stretch of highway you are probably well aware of the lack of development, overwhelming amount of rock, and the expanses of water. Over 98 miles of forest needed to be cleared and 25 bridges were constructed over the numerous bodies of water in the area.

Within 20 years of the completion of the Canadian Pacific Railway in 1885, Canadian citizens were asking for a national highway.  For many years government put off this concern deeming it unnecessary.  However, upon the eventual completion of the Highway parts of Canada became connected in ways that previously impossible.  This marked a huge improvement in infrastructure, national corporation, and job creation.  The Trans-Canada Highway began as a national wide public work project that has revolutionized roadway travel in Canada. Construction and in turn employment continues to be associated with the Trans-Canada today as many provinces undertake initiatives to widen and provide more lanes to the highway.

The creation of the Trans-Canada highway definitively altered the natural landscape of Canada and the connect of Canada's people. This CBC radio clip captures the initial negotiations surrounding the establishment of the Trans-Canada Highway.
Posted by Krista McCracken