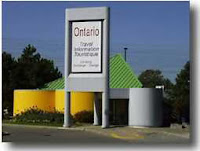 Appearances aren't everything.  But in a society that is extremely visual oriented, appearances definitely count for something.  In March 2012, the Ontario government decided to close the Ontario Tourism Centre which was located on the Ontario-Manitoba border.  The once vibrant visitor stopping point is now abandoned and windows have been replaced with plywood.  To someone driving into Ontario this building provides a visual impression of "oh? Is Ontario closed?"

The closure of the border Visitor Centre coincided with closures of seven of Ontario Tourism Centres, three of which were in Northwestern Ontario.  The other Northwestern closures were at Fort Frances and Rainy River, both of which are international border crossings with the United States.  Given the three boarded Visitor Centres in the Northwest, regardless of what direction you're traveling from it looks like someone decided to close off or just abandon a section of Ontario.

When the Ontario government announced the decision to close seven Ontario Tourism Centres, a decrease in tourism in recent years was cited.  Additionally, the government suggested that it would ‘focus on online travel marketing activities to meet consumers’ travel research preferences through major redevelopment of its tourism information website, call centre and brochure distribution service.’

Online resources are great, but have you ever traveled in Northwestern Ontario? Cell and internet service in-between major cities is spotty at best.  Also, despite this apparent renewed focus on online resources, the Travel Ontario websites has no information on Fort Frances or Rainy River.  The Northwestern Ontario section focuses mainly on Ontario parks, historical sites, and fishing.  Regional maps and smaller local attractions are nowhere to be found on the website.

The closure of border crossing Ontario Tourism Centres has left a huge gap in Ontario's tourism landscape.  Visitors no longer have a clear welcoming entrance to the Province and local tourism information which was once in abundance in these Centre's has now more or less disappeared.
Posted by Krista McCracken