The Literary and Historical Society of Quebec 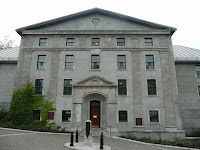 A recent Ideas episode on CBC radio examined the history of the Literary and Historical Society of Quebec. Established in 1824, by the Earl of Dalhousie, the society is the oldest historic society in Canada. In addition to the age of the society, the society is historically significant based on its original status as an English strong hold, the library it houses, the built heritage of the society's building, it's role in establishing the National Archives of Canada, and the more recent development of the Morrin Centre.

The Society is located on a site with a diverse history. From 1712-1808 the location was home to the Redoubt Royal, which was a military barracks and eventually a holding place for prisoners of war. The current building was built between 1808 and 1813 and served as the Quebec city jail until 1867. The jail was the site of the last public hanging in Quebec. Following the closure of the jail the building was re-purposed by Morrin College. In 1868 the Literary and Historical Society moved into this building.

The podcast of this Ideas episode is well worth a listen as it highlights some of the unique history surrounding the society.
Posted by Krista McCracken

Amazing!!! I was listening to this last night on my way home from a meeting and I didn't get to hear all of it. I was going to go hunting for it. Thanks for sharing.

I have the transcripts of the murder trial that ended up with the defendant being found guilty and hanged. I was told it was the last public hanging in Quebec City. The victim was Frank Conway, who was a great great grandfather of mine..I believe the guilty man's last name was McLaughlin..which happens to be my married name (no relation). The transcripts are in a secure place.